My Coming of Age(lessness). And 3 tips for navigating yours. 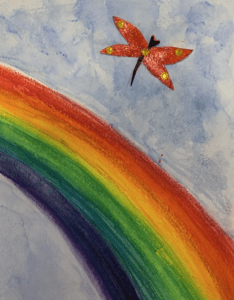 My grandmother Anya lied about her age.

Well, not exactly lied. She just conveniently subtracted a year or two. (Every year or two.)

Trust me, I’ve been tempted to do the same.

But I feel even worse about lying than I do about having just turned s-s-s-sixty.

(Wow, I just blasted that all over cyberspace.)

As any woman who’s getting older will tell you, it isn’t easy aging in our culture.

(Especially when most of the models in “women’s magazines” are actually teenagers.)

I remember when I turned fifty at my big fat advertising job, a friend whispered “don’t tell anyone.” Although I didn’t follow the advice, I knew where that comment was coming from.

The ad biz, like much of our youth-obsessed culture, can make you feel like there’s an expiration date stamped on your forehead.

Thousands of years ago, the elders in the tribe were actually revered for their wisdom and their experience.

They were the Medicine Women and the High Priestesses.

Yet, isn’t it ironic that the word “hag” actually comes from “haggia” meaning “holy.”  And “crone” is derived from the word “crown.”

Many women today talk about feeling “invisible” as they age. But I wonder if that’s because we don’t really see our own value.

We survey our sagging this and wrinkled that, but overlook the gifts of our experience.

We’re so busy comparing ourselves to cover girls, movie stars and younger versions of “Us” that we miss the miracle of Who We Are.

If I don’t think about “the number” of this particular birthday, I’d have to say that I’ve never felt younger or more full of life and possibilities.

And you’ve gotta admit that I’ve turned sixty this year in some pretty great company—-including a couple of “hags” named Oprah and Christie Brinkley.

Oh, now Edna, the cruel critic who lives in my brain, is snidely saying “Well, you’re no Oprah or Christie.”

And that’s something I intend to celebrate this year. And for all the years to come.

In my opinion, even the best anti-aging product isn’t half as effective as a pro-aging attitude.

Here are a few tips for developing yours:

Count your blessings. Not your candles.

Of course, it’s easy to say “it’s just a number” until you hit 40, 50 , 60 or whatever. ” Once you get past the freaking out stage, try re-training your brain to count the many gifts that come with age.

Like freedom from the collective “Should.”  It’s liberating to finally value what You are feeling more than what They are wearing, thinking or doing.

(I never really knew who They were. But I sure gave them a lot of power of my life.)

It’s easy to look in the mirror and focus on what we’ve lost. But if you take the time to look within, you’ll be amazed at how much you’ve gained.

(And I’m not talking about those five pounds either.)

When I was a kid, there were all these ridiculous rules. Like you weren’t “supposed to” wear white after Labor Day. And women of a certain age were “supposed to” cut off their hair and wear sensible shoes.

And last month, I started a Tantric Dance Class. It happens to be my first dance class since childhood when I was branded a “klutz.” (See, It’s never too late to heal those childhood wounds.)

If we don’t want to fade into the background, let’s put the pursuit of joy into the foreground.

(I’m plotting my next age-inappropriate action as we speak. What about you?)

Did you know that dragonflies spend most of their lives crawling around the bottom of a pond?

After being stuck in the muck for years, something propels them to climb up onto a reed or a stem. And there, in the sunlight, their wings magically unfurl.

As the “flight instructor” for the Dragonfly Movement, I hope that my new website will propel you to get unstuck from your muck and support you in unfurling your wings.

Come fly with me.

It’s never too late to become ageless. And cageless.

How do you feel about the age-old issue of age? We’d love to hear any wisdom, insights or thoughts that are bubbling up for you. Just wing it below