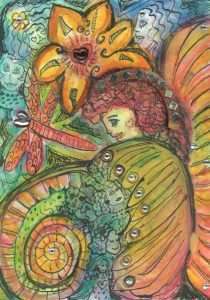 This story is the closest that this nice Jewish girl (uh, woman) has ever come to a Christmas miracle.

I hope its lessons help bring miracles into your New Year.

On December 23rd, I drove from L.A. to Ojai with joyous anticipation.

This was going to be the first holiday that my husband Will and I would spend with our son in four years. And the first time ever that he was going to see and stay in our new Ojai home.

(As some of you know, we’ve been stuck in the muck of our only child’s addictions the past several years. And have lots of lost time to make up for.)

HIS VISIT WAS FOR ONLY 30 HOURS.
BUT WE PLANNED TO CHERISH EVERY MOMENT.

The plan was Will would drive our son and his friend up to Ojai Christmas Eve afternoon.

And I’d head up the day before, to prepare for a warm and cozy holiday.

I bought his favorite foods, wrapped gifts and made the house all fun and festive (in my own quirky non-denominational way).

Listening to holiday music, I worked like a happy little elf until I became a cold little elf. (Ojai can dip down to the 30’s at night.)

So, I turned the heat on. Well, tried to. And got smacked by a blast of cold air.

I’D GONE THROUGH FRIGGIN’ HELL WITH MY SON.
WAS IT ASKING TOO MUCH TO HAVE A LITTLE HEAT?!!

Visions of a warm holiday had been dancing in my head for months.

But now it felt like the universe was playing a cruel joke on me.

Shivering, I called three different heating companies, sobbing the whole story into their three different voicemails. Praying that one of them would call me in the morning,

With my teeth chattering, I crawled into bed with everything I had—mittens, a hat, leggings, socks, a robe, and Lucky Dog.

First thing in the morning, I got a call from the nicest sounding repairman on earth.

Gratefully, he showed up in 15 minutes. And informed me that the heater wasn’t the problem.

OUR GAS HAD BEEN TURNED OFF?!

That meant no hot water. And no stove either.

Next, I called the gas company and eventually reached a human (and I use that term loosely.)

Robot Woman told me that our earthquake valve (whatever that is), must have been triggered and shut off the gas.

And that a repairman could come out to fix it for $78. Sometime before 8PM.

I asked nicely if she could give me a smaller window of time. Or call when the repairman was on his way.

She didn’t care that I had errands to run or that I’d be captive all day.

After the fifth “that is not our policy, M’am”, I went ballistic.

YEP. I LOST IT THEN AND THERE.

My usual polite, understanding self cracked wide open. All the fury and indignation that have been hiding underneath years of angst, fear and worry ROARED OUT.(Robot Woman was totally unfazed, btw.)

Just then, a car pulled into our driveway. I was surprised to see our contractor and his wife, (who I’d only met once.)

Evidently, Will had sent out an SOS. And they answered it, truly becoming my Christmas angels.

Unloading a space heater. he said he’d wait at the house in case the gas company came.

Then, she whisked me off to their home for a hot shower and breakfast (homemade persimmon toast and a protein shake, no less.)

CAN YOU BELIEVE IT?

As if that wasn’t magical enough, we came home to the warmest, coziest house ever, with two picture-perfect fires crackling in the living room and dining room.

I hugged them good-bye with grateful tears streaming down my face,

But there was more.

My dear friend brought another heater and moral support. And a caring neighbor dropped off blankets and parkas just in case the gas company never made it.

Well, by the time Will, our son and his friend arrived, the house was so full of love, that I expected animated hearts to float out of the chimney.

Our son’s first words were “I can see why you love it here so much. It’s just so beautiful and peaceful.”

I got ferklempt watching him and his friend just sitting by the fire and reading.

We sipped hot cider and chatted like old friends. They explained that in a house full of 30 guys they never get a chance to just be quiet. And they savored it.

(As you can see, Lucky loved chilling with his “bro.”.)

I was so happy I almost forget about the whole heat situation.

But just as it was starting to get dark and cold, “Sir Galahad” galloped, I mean, drove up the driveway.

THE MIRACLES KEPT ON COMING.

When I told him the whole story, he listened compassionately and insisted on waving the $78 fee.

It took a while but he finally got the gas turned on and everything working.

We tried to pay him but Sir Gallahad wouldn’t accept a penny from us. Just a little food to go.

He didn’t just restore our heat. He restored our faith in repairman-kind.

WE FINALLY GOT WARM AND COZY.

The rest of our visit felt even better than we’d imagined.

Nothing dramatic happened (thank God). Just the simple bliss of being together and truly connecting (without television, computers or cellphones.)

As we drove off into the sunset we breathed in the beauty of Ojai’s famous “Pink Moment.”

And all that we’ve learned as a family about being in the moment. 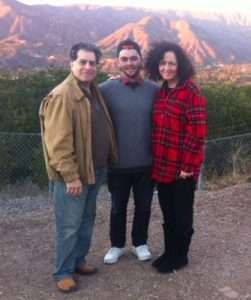 WHAT’S THE MORAL OF THE STORY?

When we set an intention, (in my case, to have “a warm and cozy holiday”), we have no idea how the universe is going to deliver it.

When the heater wouldn’t work, I felt like the universe was playing some cruel joke on me.

But as the story unfolded, it was clear that everyone and everything was conspiring on my behalf.

Just not the way I expected.

But in truth, I got a warmer and cozier holiday than I ever could have imagined.

A RECIPE FOR MAGIC.

When you go to a fabulous restaurant, you place your order, right?

But you wouldn’t dream of telling the chef what ingredients to use. Or how to prepare them.

So, this year, when you set your intentions,envision how you want to feel.

Let go of how it’s going to happen.

And let’s just see what special magic the universe cooks up for you.

To me, there’s no greater magic than opening our hearts and sharing our truth with one another. Feel free to share yours in the space below.