From Ewww To Awe.

One of the joys during the Age of Corona has been dining in our magical backyard.

Having a refuge from the insanity of the outside world has literally been a breath of fresh air.

That is, until a sickening stench began wafting through the air. And took up residence somewhere around the mint and the rosemary.

For an entire month, our dinnertime conversations revolved around what the muck was causing that putrid smell.

Was it the septic tank? A sewer line? Horse manure? Or God forbid, a dead animal?

The Stench Goes On.

We took Blossom and her Super Nose on several smelling safaris up our hillside and throughout the neighborhood. But came back baffled.

We had a plumber, a contractor and a septic specialist come out. They just sniffed and shrugged.

We tried capping vents, bleaching drains and hanging giant sachets. But nothing helped.

It made me crazy. Like all the s**t that we can’t control out in the world had landed in our own backyard.

Finally, I made the call that I’d been dreading—to Humane Wildlife Control.

Melissa, the owner answered with a smile in her voice.

She said that she’d been trying to locate a sick bobcat in our neighborhood for about a month. And would be happy to check out our property on Saturday.

I prayed that poor bobcat wasn’t hidden in our bushes. And tried to let go until Saturday.

The sweet smell of surrender.

I decided to meditate. And in the silence, I was guided to do these three things:

1.Accept
Instead of obsessing and ranting about something I couldn’t control, I breathed deeply with the intention of finding comfort in the discomfort. In other words, accepting What Is.

2.Refocus.
I consciously chose to pay attention to all the sweet smells in my life. Like our velvety red roses. The freshly-cut lawn. And Blossom’s fur after a bath.

3.Reframe.
Then, I imagined a different story: What if that disgusting smell was there because for some magical reason, I was meant to meet Melissa?

I know it sounds crazy. But what did I have to lose? (Except the P.U.)

You won’t believe what happened next.

Well, Saturday finally came. And I found myself walking up our driveway, chatting with Melissa, as if we were old friends.

She told me that, as much as she loves animals, she dislikes bugs.

Of course, I had to tell her how much I love dragonflies.

With that, Melissa told me that a psychic recently approached her at a party and out of nowhere, said, “Red dragonflies are your angels.”

And just as I was about to tell her my magical red dragonfly story, (you can read it here), A REAL LIVE RED DRAGONFLY FLEW OVER THE TWO OF US!!!

I’m convinced there really was a reason that I was meant to meet Melissa:

To be reminded of the magic hidden in the muck. (And now, to remind you, too.)

Meanwhile, at the scene of the stench.

After marveling at our red dragonfly synchronicity, I walked Melissa over to our outdoor dining area. (Praying she wasn’t going to find a bobcat or any other precious animal on the hillside.)

Fortunately, we never got that far.

Without skipping a beat, Melissa announced:

“I know where that smell’s coming from. Those things stink like dead animals!”

She ceremoniously, untied a plastic bag that was hanging on our Japanese plum tree.

Unbeknownst to me, my husband Will had put a “fly trap” there to keep unwanted guests from swarming our dinner.

And boy, did it stink!

I quickly tossed the bag in the trash. Shaking my head in disbelief, that the cause of the stench had literally been right under my nose.

I was so grateful to Melissa that I gave her a copy of my book (which happened to be inspired by a magical encounter with hundreds of red dragonflies.). 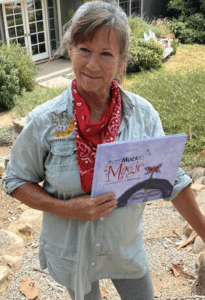 And speaking of gifts….

When there are things in the outside world that we can’t change, I believe we need to make changes on the inside.

Accepting, Refocusing and Reframing helped me transform my “Ewww” into “Awe.”

I invite you to try that process on something that stinks in your life.

And if you could use some help rising up from your muck, I’d be happy to give you a free 15-minute intuitive phone session (aka “An Uplifting Gifting”). 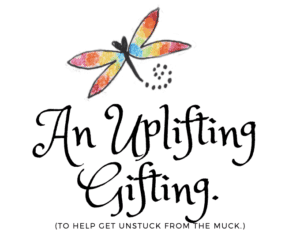 Just email me at hello@wendiknox.com and I’ll schedule you a time ASAP.

There’s a lot of muck out in the world. But together, we can find the magic.

With wings of love,
Wendi

P.S. You know what else is magical? Hearing from you. Just scroll down and  share a thought, a story or whatever speaks to you. You never know who you’ll uplift. xo